Jury selection began Tuesday in Washington in the trial of political operative Roger Stone on charges of obstructing justice and lying to Congress. But instead of focusing on those narrow charges, the corporate media is trying to make this about Stone’s personality while attempting to revive the discredited allegation of collusion between the Trump campaign and Russia.

The media has a long history of putting personality above facts. Judgement should be reserved to what people say and what they do. Instead we’ve seen character assassination of many people, including imprisoned WikiLeaks publisher Julian Assange, rather than a truthful examination of his actions and the dangerous charges against him for practicing journalism. There is the same obsession with the personalities of Donald Trump and Vladimir Putin, for instance, rather than objectively examining their actions, particularly on foreign policy. In the same way, Barack Obama’s personality was elevated to cover up for his foreign policy disasters in Syria, Libya, Ukraine, and Yemen and in building tensions with Russia. 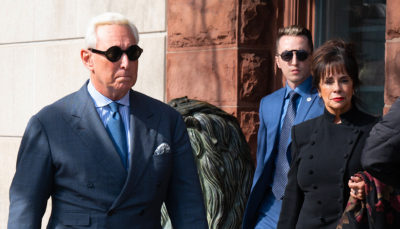 Stone on his way to court in February. (Victoria Pickering/Flickr.)

Now Stone, by all appearances a sleazy operative in a town full of sleazy operatives for both parties, is portrayed by The New York Times as a “swashbuckling and abrasive political trickster for decades” and “eccentric and flamboyant.” Stone is still innocent until proven otherwise. It’s becoming harder to find, but serious reporting about a person on trial would ditch the adjectives.

The reporting on Stone has little to do with the actual charges against him, but rather serves the purpose of reviving a narrative the media falsely pushed for two years: that the Trump campaign colluded with Russia to turn the 2016 election.