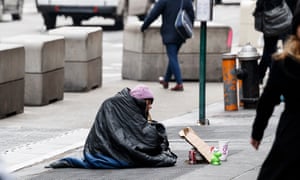 Rather than offer a report on the State of the Union, Donald Trump used his annual primetime slot in the House of Representatives to host a re-election rally. The House speaker, Nancy Pelosi, summed up the sentiment of the House majority when she stood behind Trump and ripped the text of his speech in half. “I tore up a manifesto of mistruths,” she later said. But of all the lies he told, the president is proudest of the economy he claims is booming. Poor and low-income Americans know that the economy is, in fact, his greatest vulnerability.