Yesterday, the curtain rose on the House’s impeachment show, featuring State Department career diplomats William Taylor Jr. and George Kent as the first witnesses. Mainstream media outlets claim Taylor and Kent have “damning evidence” that President Trump delayed military aid to Ukraine in a quid pro quo to pressure the Ukrainian president to dig up dirt on the Bidens.

Don’t believe it. Kent and Taylor have no evidence against Trump — only a false rumor spread during Sept. 7’s farcical game of telephone. Taylor heard the claim fourthhand and then called Kent, who got it fifthhand.

Making these diplomats lead witnesses in the impeachment show is a ruse. They never spoke with Trump about the aid and admit they had no direct knowledge of why it was delayed. They weren’t even on the controversial July 25 phone call that has become the pretext for impeachment. 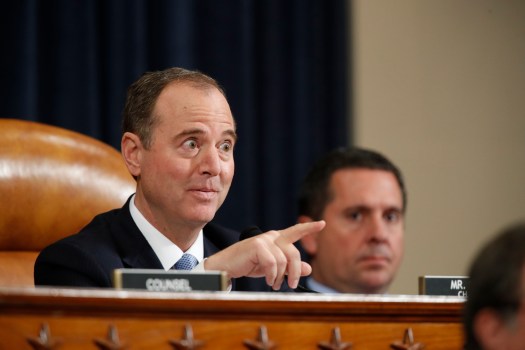 On that call, Trump asked Ukraine’s president to investigate meddling in the 2016 U.S. election and Joe Biden’s son’s Ukrainian dealings. Trump didn’t say military aid was contingent upon it. But Democrats insist a quid pro quo was implicit — and an impeachable offense.

Now it’s showtime, and House Intelligence Committee Chairman Adam Schiff (D-Calif.) has to parade witnesses in front of the cameras to make it look like the Democrats have the goods on the president.

What Taylor and Kent heard would never be considered in a court of law. The fact that Schiff’s leading with them indicates he has no real evidence.